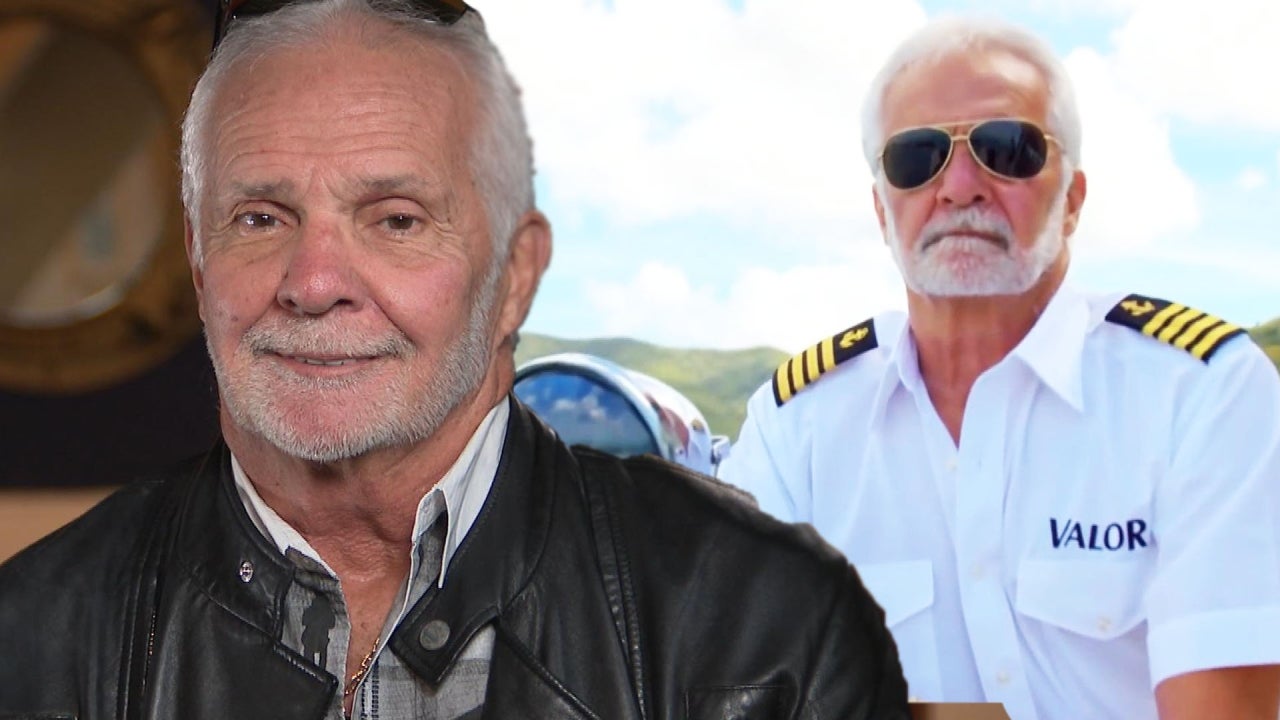 The stud of the sea is back, and marking a milestone: a decade on TV and at the helm (literally) of the Below Deck franchise.

“You know, it’s difficult to get your head wrapped around it,” Captain Lee Rosbach admits to ET of the show entering its 10th season, “because I see actors and actresses and personalities that have actual talent and I just happen to be a guy that gets filmed doing his job and I don’t think that anybody expected on season 1 that it was going to explode into what it has, what? Four spinoffs? Ten years for my show and it’s just like, wow.”

ET sat down with Captain Lee inside SHOREbar in Santa Monica, California, where he (kind of) dodged questions about the many hints dropped in teasers for the season ahead that this may be his last time manning a vessel on TV.

“I don’t think in finite terms like that,” he adds of putting an end-date on his Below Deck life. “I just you know it’s still fun. I am still going to do it… until the audience doesn’t like it anymore.”

In the trailer for season 10, Captain Lee says, “My mind’s there, my heart’s there. My body just won’t cooperate,” and appears to tear up as he confides in his crew about a to-be-revealed tough decision he had to make.

“I put my heart into my work,” he says of those tears. “I mean, everybody knows I wear it on my sleeve, so I am very transparent.”

After this interview, Captain Lee more directly hit back at speculation he’s exiting Below Deck on Twitter, asking a follower who declared season 10 his final season, “Where in the world did you hear that?”

Fans will have to tune in to see just what decision Captain Lee had to make, but he promises it’s born out of his personal mantra — which he also hopes is his legacy as a captain.

He also says, he’ll stick with the show as long as it’s good to him.

“Doing the show is still fun,” he explains. “I still enjoy it. It seems weird sometimes when I realize that I am the only one who started this and that is still here, and I look back at all the different cast members that we have had — some I thought were really, really great. I couldn’t understand why they didn’t come back, and others? I really enjoyed giving them the boot.”

Captain Lee’s favorite firing came in season 3, when he handed deckhand Dane Jackson a plane ticket home. And as for any questions about whether the producers behind the fourth wall of the show have a say in those moves, Captain Lee declares, “Those decisions are mine. I reserve the right to fire whoever I choose.”

He’s also not a fan of crew members signing themselves for the show in pursuit of fame. This is a hands-on job first and foremost; the cameras are just there to capture the reality.

“Some of them not only drink the Kool-Aid, but they bring their own Kool-Aid with them,” he grimaces. “It’s like, are you kidding me? I had a guy once…. oh my god, he was an engineer/deckhand, and I needed him to change out the filters in the air handlers for the air conditioning units and he looked at me just as serious as a heart attack and says, ‘I’ll get right on it, Cap, as soon as I get a camera and a sound guy.’ I said, ‘As soon as you get what?!”

When it comes to familiar faces, there are two Below Deck alums he misses most — Kate Chastain and Eddie Lucas — and two returnees joining Captain Lee this season, aboard Below Deck‘s largest vessel ever: Fraser Olender, season 9‘s second stew (now chief stew), and chef Rachel Hargrove.

“I think Fraser did an outstanding job,” Captain Lee says, despite Fraser having some insecurity about his performance in his new role. “I think that he acquitted himself very, very well. He was a constant gentleman, to the point where I stopped calling him Fraser. I just referred to him as Mr. Olender.”

“If he thought he was under performing, I don’t know what may have given him that impression,” he adds, “but it just tells me what I expected of him: That he always wants to over-perform — and over-deliver — and under-promise.”

Then there’s Rachel, whose often unpredictable antics can cause a little chaos, on and off the show.

“Rachel is still like being in the room with a hand grenade and somebody already pulled the pin,” Captain Lee cracks. “You just don’t know when she’s gonna go off. … I don’t change the way that I do things because of her personality. I think she’s got a great personality and I like working with her and her food is over the top.”

“Sometimes there will be moments when I’ll be in the galley, and I’ll be– there’s just little hints, little clues … of a s**t-storm coming,” he admits of some of Rachel’s behavior, “So sometimes, I’ll just extricate myself from that situation.”

Ten years in, and Lee admits he’ll never fully get used to the fame, in part because he truly had no clue what he was signing up for.

“You know, all the other captains have gone through the audition process — which I didn’t,” he explains. “It’s funny because nobody gives you– there’s no little booklet that says, the show that you are working on that you didn’t even want, or didn’t even apply for, is going to be a hit and here is how you are supposed to behave. You know, how do you behave when you get recognized? How do you behave when you know certain things happen to you, and certain opportunities and certain perks come your way? There is no manual for that.”

Captain Lee jokes, if he could go back and give himself one piece of advice before signing up for Below Deck, it would be, “Run!”

“No, I would still embrace it,” he clarifies. “And once you realize that your anonymity is gone forever, that is permanent. That is never going to change. That is something — and it’s funny, I get recognized in different countries, you know? I thought when we did Thailand, I would be safe over there.”

The show’s also given him a platform to be an unexpected advocate for drug abuse and addiction awareness. Captain Lee’s son, Joshua, died of an accidental overdose in 2019.

“I’m very passionate about it, and for obvious reasons, and it really pisses me off that more people that have the power to do something don’t get rid of some of the stupid regulations that they have so that you can accomplish some good,” he says. “We lose 300 people every day. Now, I guarantee you if we had an airliner falling out of the sky once a day, there wouldn’t be a plane flying tomorrow, but we use lose 300 people a day to this deadly thing called fentanyl, and nobody says anything! It just keeps rolling along. That’s what’s so very, very frustrating — and there are 300 sets of parents out there that are gonna get that knock on the door every day: tomorrow, the day after that, Monday. It’s gonna keep happening and I don’t know anybody that doesn’t know somebody personally that’s hasn’t been affected by this.”

Captain Lee has found an ally in Bravo-sphere in this fight in Summer House‘s Carl Radke, who lost his brother, Curtis, to a drug overdose, as well. Carl’s brother’s death served as a wakeup call for himself, choosing to get sober after Curtis’ death.

“When I approached Carl, he was he was going down a rabbit-hole that was pretty dark and we had a lot of long talks,” Captain Lee recalls. “Sometimes we talked for hours, and to see him where he is now doing what he’s doing, having him accomplish his goals just…. you know, you can’t help but love the guy, and him staying true to what he wanted to do. He just needed a little help.”

As for the new season of Below Deck, Captain Lee recommends viewers have their life-preservers ready.

“There’s gonna be things happening that you’re like, ‘Really?!'” he notes. “You’re gonna go, ‘I didn’t see that coming….’ I think it’s gonna be one of our best seasons ever, I really do. It’s a lumpy ride, so you need to strap your a** in.”

And that’s why Captain Lee ranks season 10 in his top two seasons of Below Deck ever, only outranked by season 1.

“[Season 1] was all new and nobody really knew what the hell we were doing,” he says. “Nobody had ever filmed on a boat. We never wired a boat for sound before. I’ve never been in front of a camera, other than, you know, I don’t take selfies, ’cause I’m not any good at it, and it was just totally unique. It gave me a whole new perspective on the industry and how hard the people work and how dedicated they are to their profession, and I’m just very impressed with that.”

‘Below Deck’ Season 10 Trailer: The New Crew Gets Steamy and Chaotic

Faye Clarke on the Challenges of Bringing ‘Adventure’ to ‘Below Deck’