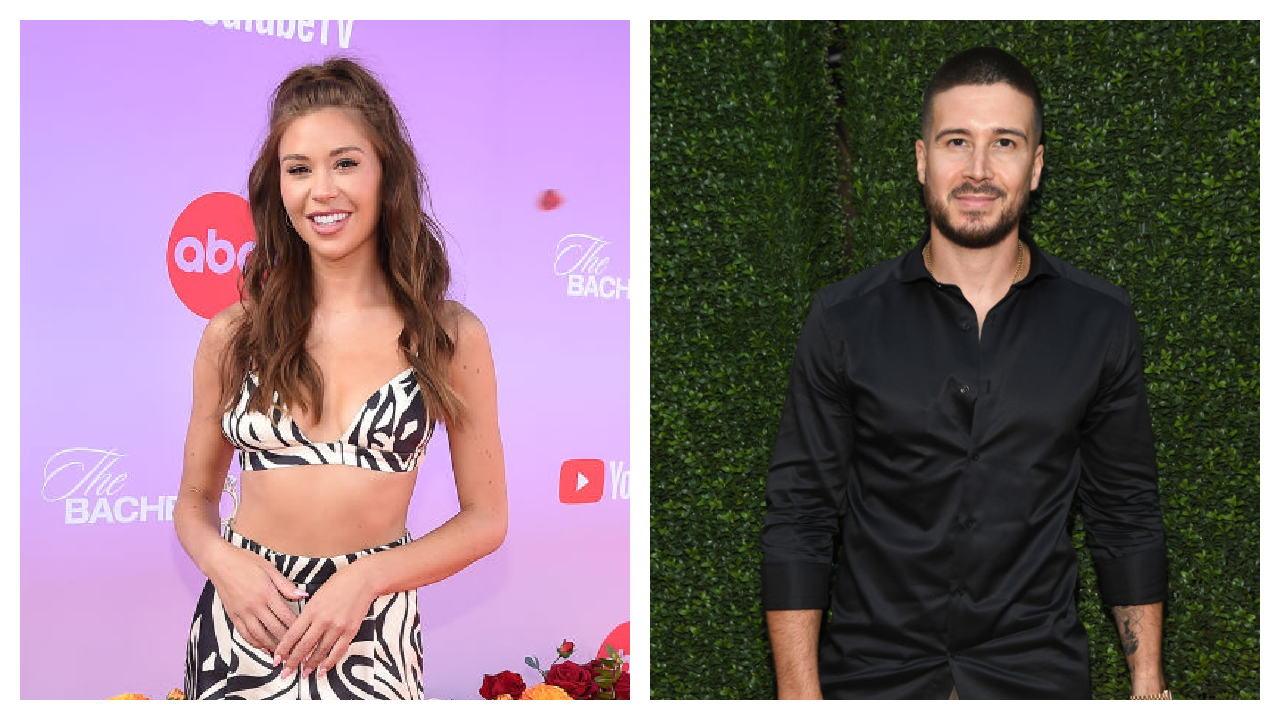 Gabby Windey is opening up about her rumored romance with her Dancing With the Stars co-star, Vinny Guadagnino. While the Jersey Shore: Family Vacation star is no longer on DWTS, speculation that the pair might be more than friends began after they recently exchanged flirtatious comments on Instagram.

ET spoke to The Bachelorette star and her partner, Val Chmerkovskiy, ahead of season 31’s finale Monday, where she said their back-and-forth social media was “all in good fun.”

“That’s for me to know and you to never find out,” Windey joked when asked about her relationship status with Guadagnino. “You’ll have to ask him and then let me know what he says,” she added, “It’s all in good fun.”

News of a possible romance between Windey and Guadagnino comes just weeks after Windey announced her split from Erich Schwer and less than two months after their engagement aired on The Bachelorette‘s seasonfinale.

“I did just go through a breakup. The end of our relationship happened because we both weren’t in step and in sync with each other on our common goals or just the way we approach life,” Windey said at the time. “We weren’t each other’s best match.”

“There are so many factors, just in being able to be present. When you’re going through stress in your outside life, it’s hard to come and stay present,” she added. “But [my DWTS partner] Val makes it easy. He’s been such a good friend, such a good partner.”

Her connection with Guadagnino and her dance partner aren’t the only ones the reality star has made while on the show. Windey said some great friendships have blossomed as a result of her time on DWTS.

“There’s been some great people here. I mean, Selma (Blair), Jordin Sparks, you know, all of us in the finale have gotten close. Shangela lives across the hall, so, it’s so nice, it really feels like a family,” Windey shared.

As for how it feels to be in the DWTS finale, Windey called it “crazy.”

“I mean, it definitely feels like the energy is different,” she said. “I think getting the chance to perform for the last time is just a reward for how hard we’ve been working all season, and I’m incredibly nervous and really competitive.”

Windey’s hoping her competitive nature combined with her “heart and spirit” will help her take home the mirrorball trophy Monday night.

“It has been a very competitive final,” Chmerkovskiy added. “It’s gonna sound terrible, but it’s really the first time I might not be heartbroken. I might just be OK with someone else winning because of how good those other people are, and it’s not gonna feel like, ‘Damn, we deserved it.’ Of course, I want to earn it, but there are some really good couples in this finale, and may the best couple win, truly, and I hope that’s us.”

The Dancing With the Stars season finale airs Monday at 8 p.m. ET/5 p.m. PT on Disney+.

Gabby Windey on Her Awkward ‘Dancing With the Stars’ Kiss (Exclusive)