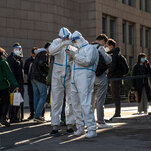 China wants to fine-tune its stringent pandemic restrictions to reduce the disruption to daily life caused by lockdowns. But officials are still taking few chances.

Barely a week after no longer requiring residents to show a negative Covid test to use mass transit, the authorities in the northern Chinese city of Shijiazhuang have locked down much of the city for five days as infections surge.

In Shanghai, many neighborhoods have begun requiring frequent Covid tests again only days after telling residents that the tests were seldom needed.

And across much of Beijing, officials have ordered schools and many businesses to close as daily cases rose over the past week to more than 1,400 and the country acknowledged its first coronavirus-related deaths in months.

China said earlier this month that it would fine-tune Covid restrictions to limit the disruption caused by lockdowns, quarantines and daily mass testing. Beijing’s leaders were looking for ways to adjust the stringent measures that have isolated the country from much of the world, dragged its economy down and disrupted the lives of millions of citizens.

But in cities across the country, rapidly spreading outbreaks of Covid are testing the government’s resolve to stick to its pledge and raising questions about when — if ever — the world’s second largest economy might reopen.

A testing site in Shanghai earlier this month.Credit…Aly Song/Reuters

China’s tally of new infections has almost climbed every day since late October, with over 25,000 cases a day now scattered across every province in the country. The number of cases announced on Tuesday, 27,307, came close to China’s single-day record of 28,973, set on April 14 during the early days of the Shanghai lockdown.

According to Nomura, a Japanese brokerage, 49 cities representing a third of China’s population and two-fifths of its economic output are now under partial or complete lockdowns, a sharp increase from a week earlier.

China is the only major country in the world still attempting to eradicate Covid infections three years into the pandemic, with the ruling Communist Party asserting that it is the only way to protect Chinese lives. But even as Beijing vows to maintain a zero tolerance approach, officials have started to acknowledge the strain it is having on resources.

When Chinese officials announced on Nov. 11 they were working to make the containment strategy more precise, they cited a shortage of quarantine beds and facilities, as well as a shortage of people for contact tracing work. They introduced changes to the rules, among them a halt to the quarantine of the personal contacts of contacts of people who had the virus, and discouraged mass testing.

The changes were a relief to citizens like Yin Wenbo, a 41-year-old kindergarten teacher in Shijiazhuang, which immediately stopped requiring a negative P.C.R. test to ride public transportation or enter many buildings. “We all have to work, and sooner or later we need to face it — besides Covid, there are many other infectious diseases, so you will never go out?” she said.

Other residents were less sanguine. Fears of a rapid spread of infection prompted families to strip shelves of herbal cold and flu remedies, and call for the city to protect them from Covid. As cases did indeed begin to climb, Shijiazhuang announced on Sunday that it would require five days of mass testing across the city and told most residents to stay home.

As the new lockdowns and on-again, off-again rounds of testing show, officials at the provincial and city level are likely to err on the side of extreme caution, given the risk of being dismissed for outbreaks, as has been the case since the start of the pandemic.

Boxes of daily necessities to be delivered to residents following an outbreak in Shijiazhuang, China, earlier this month.Credit…Visual China Group, via Getty Images

There are longer-term challenges to any effort to tweak the “zero Covid” strategy. Most Chinese have never been exposed to the virus. Vaccination efforts have petered out over the summer and autumn. That has left a population with scant immunity, public health experts warn. No significant relaxation of Covid restrictions is likely unless the country ratchets up its national vaccination program.

“That’s really important, that’s the number one most important thing to do in China,” said Jin Dongyan, a Hong Kong virologist.

Hospitals are only starting now to expand intensive care units for a wave of serious infections. Little effort has been made to set up triage centers that could, in case of a big wave of infections, send only the most seriously ill to hospitals and send everyone else home to recuperate.

“In early spring they were talking about how hospitals would not be needed to treat minor cases, but that has not been the case,” as even asymptomatic cases continue to be hospitalized, said Yanzhong Huang, a public health specialist at the Council on Foreign Relations.

Many in China are terrified of any infection because the country’s vast propaganda apparatus has spent the entire pandemic instilling terror of the virus with lurid reports of mass death and numerous “long Covid” cases in other countries.

In southern China, rapid antigen tests for Covid are in short supply as local governments run short of money for the free sidewalk P.C.R. tests that they have offered until now.

Joanna Yeung, a 25-year-old resident of Guangzhou, is mulling whether to buy an oximeter for her parents. “It may be difficult to see a doctor when the number of cases rises,” she said.

Citizens will only be reassured, said Wang Xiangwei, a Beijing commentator and newsletter writer, when trusted health experts appear on television to discuss the lack of severity of the Omicron variant for those who have been vaccinated, particularly young people who also have strong immune systems. A possible candidate, he said, was Zhong Nanshan, who helped uncover the SARS outbreak in 2003 and played a key role in drawing national attention to the initial Covid outbreak in Wuhan nearly three years ago.

There’s also a question of resources. China has not clearly detailed who will pay for medical care if a wave of cases finally occurs, raising fears among many citizens of financial strains. The country’s public health insurance system provides only limited coverage.

This is a concern for Ken Feng, a 50-year-old blue-collar worker in Shenzhen, who worries that his parents could be among the first to succumb.

“If one person is infected, it may cause more infections, and may lead to a lot of pressure on the entire family’s finances,” he said.

The biggest worry among public health experts is that China’s vaccination effort has dribbled away to almost nothing.

When China began large-scale vaccination at the end of 2021, it reserved scarce doses for working-age adults. Health officials warned older adults against being vaccinated, cautioning that there might be side effects — advice that has been hard to reverse and has contributed to lingering vaccine hesitancy. A third of the country’s citizens aged 60 or older have never had a booster shot.

The urgency of ramping up vaccinations grows with every day that more Covid infections slip through China’s “zero Covid” net, making the economic toll ever harder to mitigate. Many eateries and other small businesses have closed permanently as families and migrant workers stay home to avoid getting caught in quarantines or lockdowns. Retail sales shrank last month compared to October of last year, the government disclosed last week.

“Continuing this for the next few years just doesn’t make sense any more, given the socioeconomic costs,” said Richard Reithinger, a global health expert at the Research Triangle Institute in North Carolina.

But China is unwilling to endure a wave of cases that would inevitably be set off by any easing of measures, said Andy Chen, a senior analyst in the Shanghai office of Trivium China, a policy consultancy.

“They will definitely lock down hard again if cases get out of control,” he said, adding, “It’s really hard to see how they get out of it.”