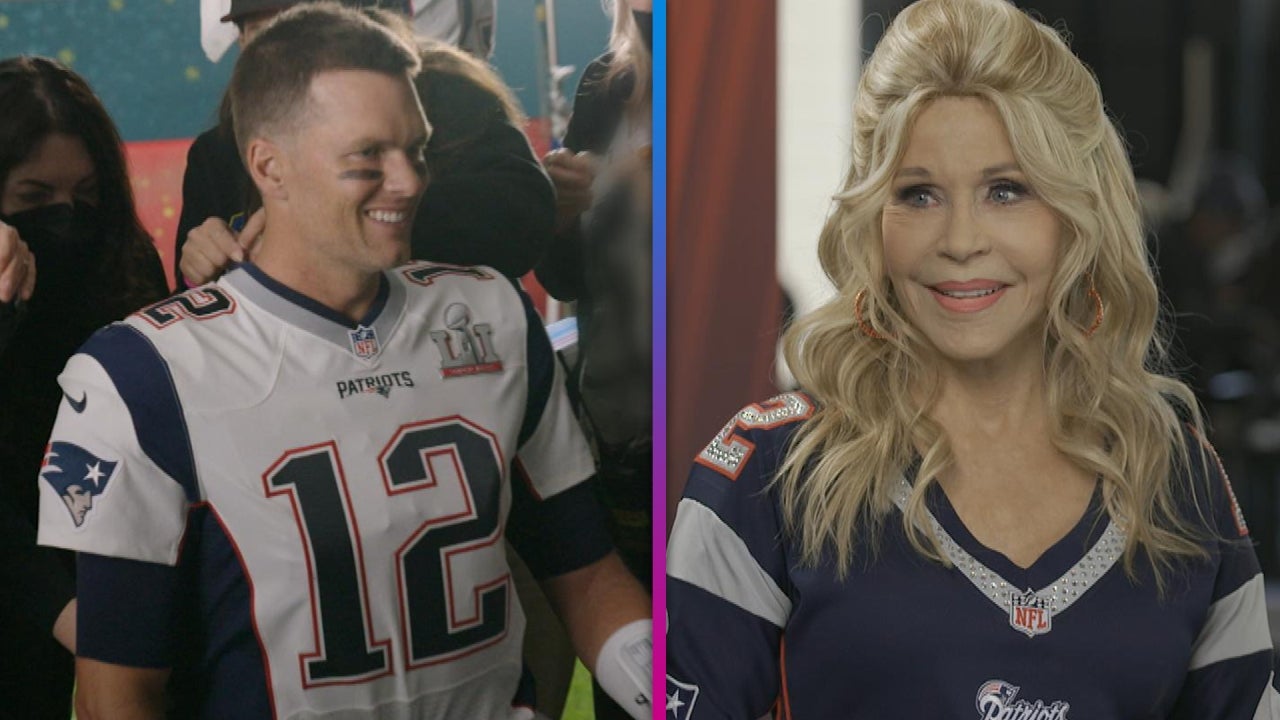 The cast of 80 For Brady are living legends in their own right, but even they can get a little starstruck from time to time!

Jane Fonda, Lily Tomlin, Rita Moreno and Sally Field sat down with ET’s Nischelle Turner this week to dish all about their upcoming film — and the major football star at the center of it all.

“Oh yeah, his presence just filled up the whole trailer and I got weak in the knees,” Fonda said of working alongside Tom Brady on the comedy. “He was so sweet.”

While Fonda was getting trailer visits, Field said she positioned herself as the “welcoming committee” on set — in part, because she’s a big football fan.

“I didn’t want them to feel- you know, they’re coming on our turf now,” she noted of the NFL stars who came to set for cameos. “I would feel really scared if I were going on a football field and playing football. So I stood out there and welcomed them and drove up and said, ‘Hi, I’m Sally. Can I get you some coffee?'”

Perhaps not everyone was as into Brady as Fonda, but the actresses did all confess to some “weak in the knees” moments they’ve had in the past — poking plenty of fun at each other in the process.

“Boy, do I have bad knees,” Moreno agreed. “It has nothing to do with Tom Brady.”

The West Side Story star did concede, however, that she’d been swept away in the past by stars like Burt Reynolds and, of course, her famous beau Marlon Brando. “He was pretty fabulous,” she admitted.

“I worked with Paul Newman,” Field chimed in. “Trust me, that wasn’t easy to go in to read with Paul and act like you knew what you were doing.”

The quartet also couldn’t help but gush about each other and the friendships that they forged even stronger while making 80 For Brady.

“Jane literally is one person in my life — and I don’t have many, admittedly — who would not let me go,” Field shared. “I’m just absolutely the recluse of the group, and Jane just won’t take no for an answer. Every time I’ve had to talk about Jane, I end up crying, because it has been so incredibly important to me to have Jane in my life.”

For her part, Fonda said she’d been “fascinated” with Field since the 1970s and “I just decided that I’m going to be her friend, she’s going to be my friend, and that’s all there is to it.”

“I mean, I watched every performance multiple times of hers. I’ve seen her on Broadway, asked her how she did that,” she recalled. “Now I got to see her [act in person]. I mean, it’s a very different kind of film. But I got to see her create a character and bring it to life, and it was really special.”

The group said they even found meaningful moments in their less friendly exchanges on set — with Fonda recalling one scene in which she pushed Moreno a bit too far.

“We were all working together and everybody had to move very fast and be in the right place at the right time… Having worked seven years with Lily, I was used to kind of pushing her around if she was a little bit off her mark,” Fonda remembered of the tense moment. “Rita was, there was a problem, she wasn’t moving fast enough to her seat so that then Lily could come, so I pulled on her jacket and I think I pushed her at one point…”

“And I was offended,” Moreno chimed in.

“[Over] the weekend, she sent me a text and she said, ‘Not on my watch. I am 90 years old, you do not treat me like that. This is a film about women’s friendship and that will not stand, that kind of behavior. You cannot push me and you cannot do that,'” Fonda recalled. “And I was just like, oh that is so great, because you know what a guy would have done? He would’ve harbored a grudge.”

“She got it out and she didn’t harbor it for the whole [movie], you know?” Fonda praised, with Moreno agreeing that it was all about “respect.”

The Star-Studded ’80 For Brady’ Trailer Is Here: Watch!