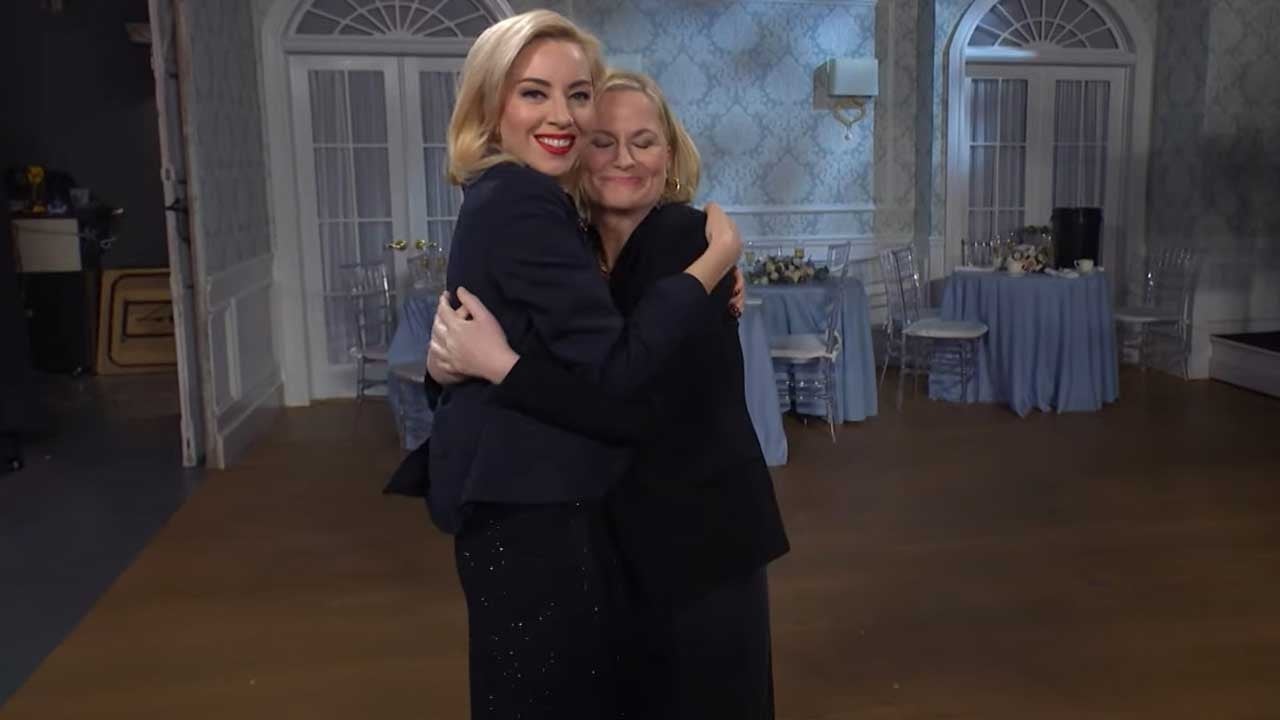 A long time coming! After serving as an NBC page at 30 Rock, working for a year behind the scenes , and auditioning to be a cast member — all nearly two decades ago — Aubrey Plaza finally got a chance to host Saturday Night Live.

The White Lotus star smiled bright as the took the iconic stage Studio 8H, and basked in the glory of the moment — while also getting a little help from some famous faces.

“My real family is here, including my grandma, Margie. They all came up here from Delaware, which is where I’m from,” Plaza shared. “Thank you. I was actually voted the most famous person from Delaware. I beat Joe Biden. That’s a fact. And he was pissed. He was livid. Look at this video he sent me.”

In a surprise appearance, the actual President Joe Biden (not an SNL cast member), recorded a message for Plaza, sharing, “Aubrey, you’re the most famous person in Delaware and there’s no question about that. We’re just grateful you made it out of White Lotus alive!”

Aubrey continued, “But I’m so happy to be back here in 30 Rock. When I was in college, I actually worked here as an NBC page… I worked with the set design team here at SNL, the guys who make all the amazing sets for the show. They win Emmys, they win Tonys, and they’re some of the sickest perverts I’ve ever met — and I’m a freak!”

Donning her old page jacket, Plaza suggested that she should give the audience a tour of the SNL studios, in tribute to her page days — which paved the way for the monologue’s second celeb cameo, and one fans were likely expecting.

“On every tour, people would ask the same question, ‘Are we going to see a celebrity?’ No, you’re going to see an old security guy eating a sandwich or a writer crying because their sketch got cut,” Plaza said, “Famous people don’t just walk around –“

Although she was cut short by the surprise appearance of SNL alum Amy Poehler, who couldn’t contain her excitement over seeing her old Parks and Recreation co-star.

“Hi Aubrey!” Poehler exclaimed as they embraced. “So, Aubrey, I see that you’re wearing your page jacket. Are you drinking again?”

“Of course I am,” Plaza replied with a smile. “I was just going to the set design office to see those old perverts!”

“Aubrey, it’s not nice to call people old,” Poehler called out as Plaza walked off. “Oh, my god. She stole my wallet. That’s my girl!”

Later in the episode, both Poehler and Plaza reunited once again, and reprised their old Parks and Rec characters — Leslie Knope and April Ludgate — for an interview segment on “Weekend Update.”

Donning a long, dark wig, gray hoodie and general attitude of indifference, Plaza slid right back into her old character, detailing the jobs people can get in local government that also don’t take a lot of effort or energy.

“Drive a bus. You don’t have to be on time and nobody cares. Work for the water department. You can drain the reservoir and find all the dead bodies and murder clues,” she listed. “Or just be a dogcatcher and just say you couldn’t find any.”

Poehler, as Leslie Knope, then came out to try and save the interview — but was a little obsessed with being on Saturday Night Live.

“I want to pick your brain about this job, about this show, because I used to watch this when Seth Myers did it by himself with no one else. And he made it look really easy,” Knope said — poking fun at the many seasons Meyers and Poehler sat side-by-side behind the “Weekend Update” desk.

Who Is Hosting ‘Saturday Night Live?’ A Guide to Season 48