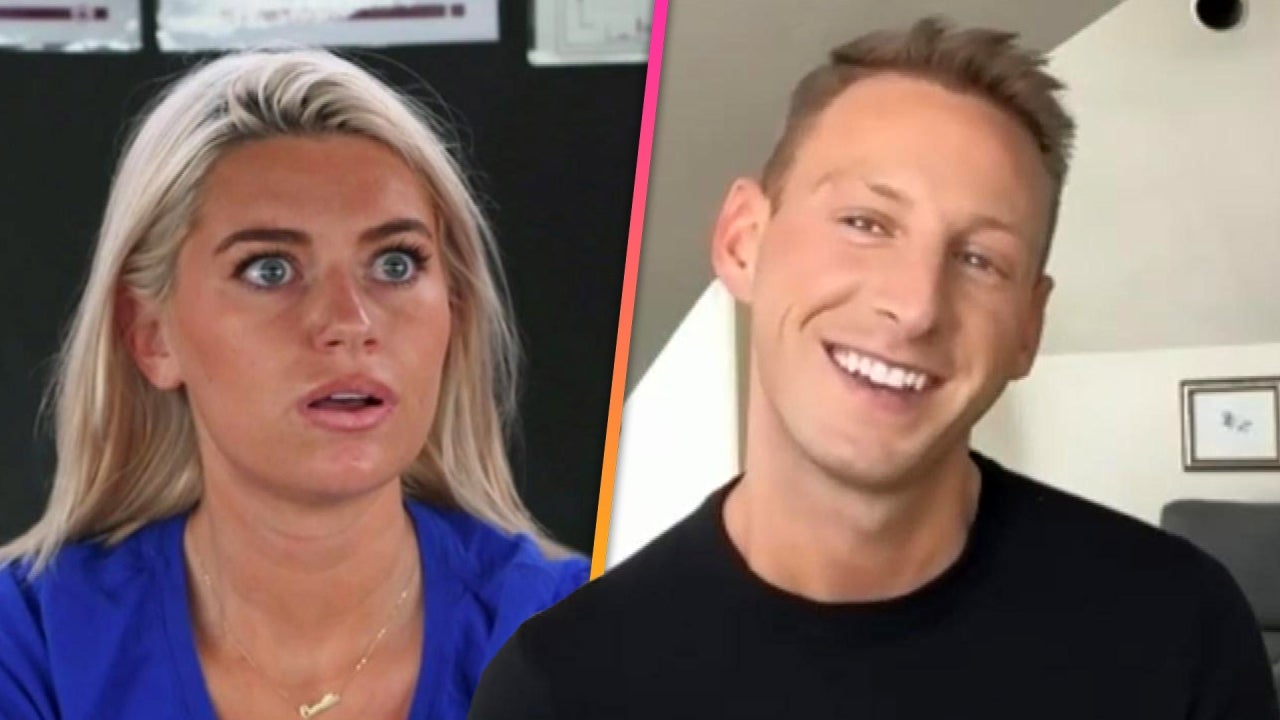 Camille Lamb, it’s time to depart motor-yacht St. David… whether you like it or not.

The dramatic deck-stew exits Below Deck after eight episodes of (metaphorical) rough seas on Monday night, after Captain Sandy Yawn put the power to fire her in chief steward Fraser Olender’s hands.

“I really love Camille as a person, but she just wasn’t helping, and we were going through such a huge transition of losing Captain Lee [Rosbach], and, you know, getting used to Captain Sandy’s management style, and there was a lot going on, not least because the boat is enormous,” Fraser reflects to ET over video chat. “Truth be told, she was just making everything harder when it was just so unnecessary. So yeah, it’s a shame. But I’m glad I made that exact decision, and I’m glad that Captain Sandy sort of gave me the ultimatum to make that decision.”

Fans — and second stew Alissa Humber — seemed to question why Camille lasted as long as she did on the vessel, seeing as she caused issues from the first charter. Fraser says the answer is simple: she wasn’t under only one boss’ purview until the most recent charter. “Until very recently, I wasn’t her only, boss, she was technically deck-stew,” Fraser notes. “People keep saying to me, ‘Fraser, why didn’t you get rid of her weeks ago?’ That wasn’t my choice. That wasn’t my call, and I had no executive power over that. But yeah, it definitely kicked me into gear [when Sandy gave me the ultimatum], because I knew that this captain was firing people and if anything, my head could be on the the chopping board next.”

Camille’s firing plays out in the first minutes of Monday’s all-new episode. She spends the moments immediately following her dismissal on a tour of the yacht, going from department head to department head to demand answers about their issues with her, receiving an echo of sorts, as each leader — Fraser, chef Rachel Hargrove and bosun Ross Mcharg — repeats the same concerns that were previously voiced to her as areas of improvement.

“Of course, no one’s ever going to take to being fired very well,” Fraser notes. “It’s not enjoyable for anyone, and it was hard for me to do that to her because I do like her a lot, and I could see myself in her a little bit, when people didn’t give me the chance. And so, it was a tough, tough call, but it had to be done and there are no regrets from my side.”

Watch it all play out here:

Despite Camille calling out Fraser for not liking her before she left St. David, Fraser says the two have been able to maintain a friendship. A future working relationship, though, seems out of the question.

“I just don’t know if we’re compatible work ethic buddies,” he admits. The two have spoken as the season’s aired, though, to air out their differences.

“We knew it was coming,” he says. “We both knew that we were frustrated with each other in the season.”

Fraser missed a lot of Camille’s episode-making antics, as they played out while he was busy doing other tasks, which also explains the delay in letting go of her.

“I sort of feel awful, because there was so much bad behavior,” he laments, “but from what I saw it was pretty bad. But I had no idea it was this terrible.”

“When I was around, Camille acted like an angel and — apart from her last few days — when I was around, she was at least pretending to work,” he continues. “And let me tell you: if I ever saw someone not doing the job while we were working our butts off, then I would crack the whip there and then, but then to see this, to watch it back, I’m shocked — and it’s not like I didn’t listen to Alissa when she would tell me that it was an issue. It was more so that I didn’t have time for that petty B.S., I just wanted to get the job done.”

“I turned a blind eye, which in hindsight probably wasn’t the best thing to do,” he adds. Fraser says the most illuminating part of watching the season play back has been seeing how Alissa handled herself with Camille. One of Camille’s biggest complaints was that Alissa constantly spoke down to her.

“Perhaps Alissa wasn’t the best in delivering, or having any conversation, with Camille throughout the season,” he surmises. “I’m pretty sure she can own up to that, too. It’s just a shame that Alissa felt like it was her job to keep [Camille] on track. It never was, it was never asked. I don’t know why she thought it was such a vital part of her job to be on Camille’s back.”

One of the pair’s most memorable face-offs came inside a guest room, where Camille was breaking down in tears after receiving a warning about improving her work from Captain Sandy. Alissa entered the suite mid-meltdown, telling Camille to go find another room to cry in, because she had work to complete in that one.

“She had to do a job,” Fraser offers in defense of Alissa. “She was, what we call, she was working, and … I’m sorry I don’t care who’s where, get the job done. There’s just no time for tears and it was just so bad, it was so overwhelming for us all, and every time there was an issue, it was related to Camille. So, we’re at the end of our tether.”

Fraser can pinpoint the exact moment he knew Camille’s time with this crew was over.

“It was catching her drinking a pint-sized of guest champagne, whilst from the job,” he shares. “And I was like, ‘Oh, and you haven’t done any of the jobs I asked you to do?’ Which are very basic. That was the end, was a catalyst, and there’s no other conversation that anyone could possibly have there.”

Camille skirted out of her stew duties early to join the exterior crew in a little day drinking, cracking into some Veuve Clicquot (which she called “Voo-vay Crew”), alcohol specifically designated for guests.

“I don’t know if she was trying to fool me,” Fraser says of Camille’s made-up name for the pricy bubby, “but I know exactly what she was drinking, and she shouldn’t have been drinking it.”

For what it’s worth, Camille’s defended her alcohol consumption that day, breaking the fourth wall in an interview of her own, claiming she was on and off the yacht that day to film confessional interviews, and in those interviews, crew members sometimes have a beverage.

While viewers are sure to miss Camille’s antics, Fraser promises the drama of the season does not leave the boat with her. In fact, according to Fraser, her exit is just the start of what’s to come in season 10.

“I always remember this season back as Camille not even being the drama,” he teases. “There’s a lot to come. I’m a bit worried about it, but there’s a hell of a lot of coming our way, and if people thought Camille was a big deal, then they’ve got a whole a lot of surprises.”

One not-so-surprising surprise will be the return of Captain Lee, who took a leave of absence from the charter season to get some medical attention back in the States.

“Captain does come back and and sort of ends his season as I wish he could have fulfilled the whole thing,” Fraser confirms. “We nail the season with a bang, and I think it was just such a great sense of– to be reunited with Captain, and to continue smashing these charters together, and then to to end the season on a high. I couldn’t be more grateful for it.”

Captain Lee’s management style is also more so Fraser’s speed than Captain Sandy’s; she’s famous on Below Deck Mediterranean for getting more involved in the goings-on of her crew’s day-to-day dynamics.

“She really started to come down on me, I think,” he recalls. “She didn’t know me, I hadn’t worked with her either, and I think that it does take some time to get used to each other and how to work. Captain Lee trusted me and that gave me huge confidence.”

Fraser admitted to feeling in over his head as chief stew on the biggest boat in Below Deck history before Lee exited, a feeling Lee says he never picked up on, but that Sandy seemed to clue into quickly. In one greenscreen interview, Captain Sandy said she’d have to let Fraser go if he couldn’t manage the stew crew through the Camille situation.

“She’s not wrong at all, but it’s it’s faking it until you make it,” Fraser says.

Fraser’s commitment to his job somewhat blinded him to the other goings-on of St. David, specifically the many inter-crew hookups. He confesses to having no idea Ross had made moves on nearly every woman aboard, or that Camille and deckhand Ben Willoughby had a brief fling before her firing.

“I know this sounds really boring, but I was so worried about not being able to get the job right, and failing that I just– there was no point where I ever stopped and thought about anyone, aside from, like, getting what’s next,” he says. “It was in my best interest to stay out of that and to not get involved, because there were too many people involved in the first place, let’s be honest.”

“I’m happy everyone had a good time,” he adds. “I think it all ended with great friendship. So, we’re in a good place now.”

Below Deckairs Mondays at 8 p.m. ET/PT on Bravo.

‘Below Deck’ Season 10 Trailer: The New Crew Gets Steamy and Chaotic