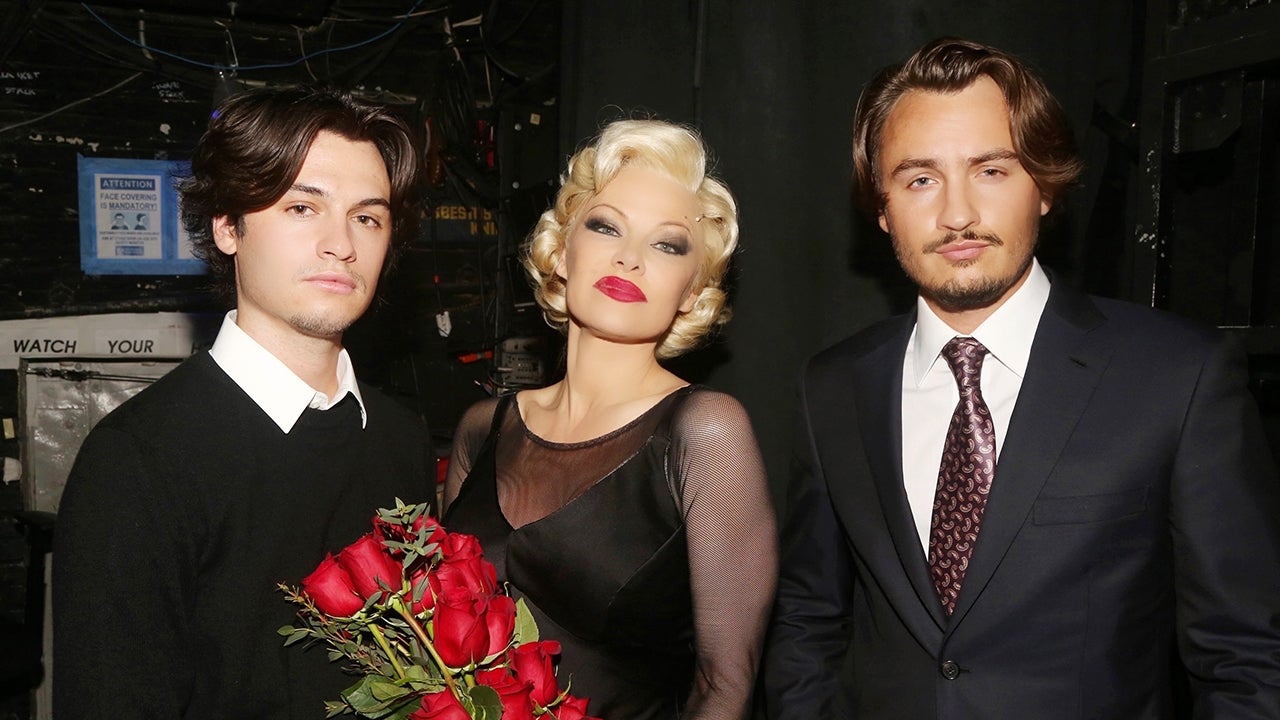 In Pamela Anderson‘s new Netflix documentary, Pamela, a love story, her two sons, Brandon and Dylan Lee, are also speaking out. While the model and actress looks back on her career and personal life, including her marriage to their father, Tommy Lee, the two share their feelings about the sex tape that was created from their parents’ stolen home videos, Hulu’s Pam & Tommy series, and how they feel about their mom now as she embarks on the next phase of her story.

Throughout the film, which debuts Jan. 31 and is produced by Brandon, Anderson is seen watching a collection of old home videos with her sons at her home in Ladysmith, British Columbia. Brandon was born in June 1995, nearly a year after the stolen tape was released, and Dylan was born in December 1997, shortly after Anderson and Lee ended their legal battle over rights to the tape for fear of miscarrying.

“I know some people would have fought to the death on it, but I’m pregnant. I don’t want this to affect the baby,” Anderson says in the film, while detailing the awful experience she had during the deposition. “Tommy and I had a miscarriage first. We were scared it could happen again. We’re not going to put Dylan’s life at risk.”

“When I was a kid, I thought everyone knew things about me and my family that they never should’ve known, and like everyone had this dirty little secret about my family,” Brandon says, revealing that he was very defensive of his mother. “I just remember in school, if anyone ever brought up my mom, I was very quick to fight.”

When it comes to Anderson’s many marriages that followed her divorce from Lee, Dylan says, “She loves getting married. Maybe it’s her favorite thing in the world, falling in love.” However, the “only person I looked at as a father figure was my dad. The other ones were just people who came in and came out,” Dylan adds.

Later, Brandon says that “my parents are probably actually the two most insane people to live on planet Earth.”

As the documentary moves onto the Hulu series, which is based on a 2014 Rolling Stone article about the guy who stole their parents’ prized possessions, including the home videos that would be edited together and sold online, Dylan slams the project for making light of a very difficult time for his mother.

“Why bring something up from 20 years ago that you know f**ked someone up?” Dylan says. “The worst part of her life and making a semi-comedy out of it didn’t make sense.”

When it comes to the tape itself, both Brandon and Dylan wish Anderson would have fought to monetize it in a way that benefited her career. “I wish she made the money. She would’ve made millions of dollars if she just would have signed a piece of paper,” Brandon says now. “Instead, she sat back with nothing and watched her career fizzle into thin air. She was in debt most of her life.”

“I think it would have been a different story if she did cash in on the tape,” Dylan says. “It just shows you, right? Like, that thing guaranteed made people millions of dollars, and she was like, ‘No.’ She 100 percent cares about her family being OK and me being OK. Never cared about money.”

“I couldn’t wrap my head around the business part of branding myself,” Anderson admits.

That said, both praise their mother for her continuous support of others, even if it threatened her financial stability. “She’s always supported everyone, grandparents, friends and the family,” Dylan says. “She’s never worried about if she’s OK, she’s always making sure everyone else is OK.”

Brandon also commends Anderson for using her platform to help others. “She wants to always use her voice for people and animals that don’t have a voice,” he says.

Before the film ends, both Brandon and Dylan praise their mother for where she’s at now and how she’s continuing to move forward in her life and career despite any setbacks that may come along the way.

“She’s not scared of anything. It’s crazy. She’s pretty badass,” Dylan says, while Brandon adds, “Now more than ever, she’s finally focused on achieving what she wants to do and not worried about pleasing anyone else.”

Pamela Anderson and Tommy Lee: A Timeline of Their Whirlwind Romance