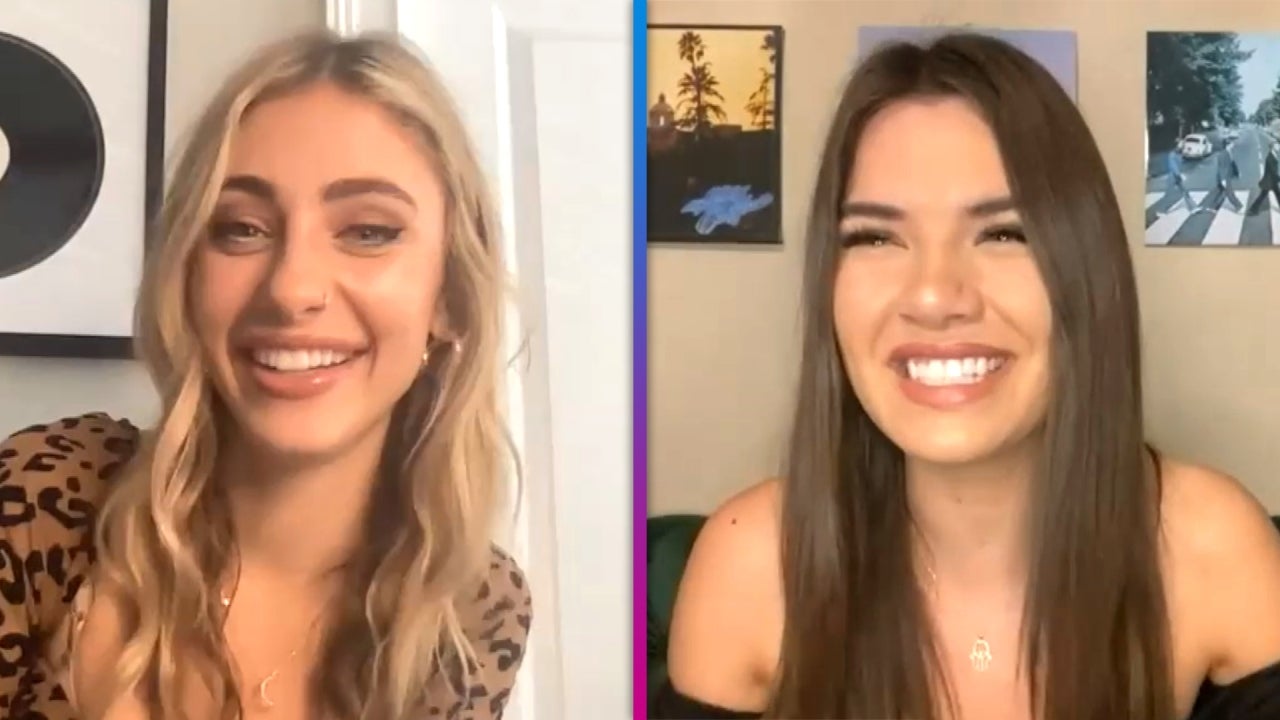 Leva Bonaparte‘s Southern Charm spinoff wraps up its freshman run on Monday night, capping off eight weeks of “wavy baby” energy and one peanut butter-themed sexcapade the Republic Garden & Lounge staff would likely prefer to forget. For stars Maddi Reese and Grace Lilly, it’s all been a crash course in reality TV.

“I’ve learned so much about myself, and I saw myself in a different view,” Grace admits to ET, joining Maddi over video chat. “If we do get season 2, I feel like I have more sticking up to do for for certain people, you know?”

As for Maddi, she says she might speak up less in a potential season 2.

“I was an open book, and I told everyone everything, and I think that you really need to be careful with where you put your energy,” Maddi shares, “and where you’re opening — and who you’re opening — your life to. So I feel like that was something that kind of shocked me on the other end, especially people that I consider really, really close friends, and watching them be so opinionated about me or my relationship, or whatever it is, it’s been really really hard on me.”

“I’m going to be more protected, I think, going [forward],” she continues. “There’s also stuff I wish I didn’t get involved in, you know what I mean? Especially other people’s relationships as much as I was trying to to defend mine.”

Maddi’s romance with Trevor Stokes served as a major through-line for season 1, seeing as the two’s first attempt at dating (before cameras showed up) failed due to infidelity on Trevor’s part. This time, it’s not cheating but unrequited love that causes tension, as Maddi’s co-worker/co-star, Joe Bradley, semi-secretly pines for her affections, while trashing Trevor behind her back.

“That’s honestly, that’s what’s made it the hardest is, [Joe] talks a lot of s**t about Trevor, so obviously Trevor has opinions about me being Joe’s friend,” she rattles off, “so I feel like Joe has made it really hard on me, ’cause he’ll say things and then Trevor will get upset, and then I kind of feel like in the middle — and I hate being in that position in the first place. Definitely in the finale, I feel like you watch it all play out.”

In a sneak peek at Southern Hospitality‘s season 1 send-off, things get heated between Trevor and Joe, with Maddi (and seemingly others) jumping in to call out Joe for his treatment of Trevor.

“I feel like people’s true colors really kind of get shown in the sense of loyalty and trustworthiness — especially trustworthiness,” Maddi teases. “For me, my journey was like, who do I trust in this whole situation? And it could have been neither for me, Joe or Trevor, but I feel like I had unfinished business with Trevor and I have always loved him and we shared that together, so I feel like that’s where kind of my loyalty stands.”

“I don’t appreciate Joe talking s**t, but I still consider him like a really, really close friend,” she adds, sharing that they’ve had many conversations as the season has aired about things said and done both ways in their friendship.

Maddi and Trevor are still an item (“Super happy,” she declares), and are planning to move in together sooner rather than later. Grace has also found love with a mystery man, though she might be keeping him away from the group after seeing some of the things her co-stars had to say during the season, namely Will Kulp and Emmy Sharrett. The couple played a bit of a game with Grace and her date to a baseball game earlier in the season, with Emmy seeing if she could get the guy to flirt back with her… right in front of Grace.

“I didn’t realize that Will and Emmy originally had a plan to be spiteful and malicious towards me,” Grace admits. “I had no idea that that was their plan, on my date, was to sabotage it. I mean, that is just mean-girl energy. Like, you just don’t do that. I never once did anything like that to anyone on the show this season. So that is what hurt me the most, I think, was you could deliberately see that they were genuinely attacking me, and that was hard for me to watch.”

“A lot of my friends and my family that saw it were like, ‘Wow, OK… these people are shady,’ and that is who they really are,” she adds. “Like, their true colors were shown. So, that sucks.”

Maddi and Grace put Mia Alario in the same category, confessing to finding her confessional comments the most hurtful of the entire cast.

“That was someone that we thought that, when we were filming, like everything was kumbaya, or really cool and like, we had respect,” Maddi says. “She is a hard-working woman, and so are we, and I feel like there was a respect there. So to see her say some of the things that she has said on-camera or off-camera, I feel like that’s kind of rubbed [Grace] and I the wrong way a little bit.”

“I did not appreciate her saying that she could take my man, because that’s not true,” Grace chimes in, referencing one comment Mia made during that same baseball game outing. “That was mean. That was that was very mean.”

“That was hard for me to watch,” Maddi adds. Also hard for her to watch was her friction with Grace. The one-time besties started the season in a rough place, having recently returned to Charleston, South Carolina, from an extended stay in Tulum, Mexico, where the vacation vibes turned out to be not the vibe for them. As they returned to real life, Maddi snagged a new job (with more power) at Republic, while Grace picked up shifts down the street at sister space Bourbon N’ Bubbles… shifts she sometimes left early, a point of contention between the two. To celebrate surviving season 1 of Southern Hospitality, the pair returned to Tulum to find their friendship again.

“We are very dynamic, and yes, we’re here to stay,” Grace declares. “I love the truce and the friendship I have with Maddi. I confide in her, and it was really nice to go back to Tulum and just redo it.”

“It was kind of like, where do we stand after all this drama went down?” Maddi says. “Grace and I were really close friends before this, before the the cameras and the filming, and everything like that. So if anything, I feel like this just kind of brought us closer together.”

While the show solidified their friendship, Maddi admits that the experience moved some people out of the friend zone for her; they’re just co-workers.

“There’s not really anyone I’m particularly not speaking to,” she clarifies, “because the thing is, we work with these people. … We all share and a tip pool, too, so it kind of forces us to be a team and work together at work, but I feel like maybe we don’t hang out with people outside of work as much as we use to.”

That includes Reagan Hack, the sometimes server at Republic who created a tornado of drama during her one-episode appearance on the show. She (quite literally) split the group in two by excluding half the staff from her birthday celebration; when the two halves came together at a bar later that day, things exploded, as allegations of infidelity between Reagan and Bradley Carter surfaced. Joe failed to back Maddi’s claims up, as Bradley deflected, turning the issue back toward Maddi by bringing up the fact that Trevor and Emmy used to hook up (including once involving the aforementioned peanut butter).

“No offense to her, but she was just a one-hit wonder,” Grace says of Reagan, shooting down the idea of bringing her back for a second season. “She had her moment, and I don’t think she’s a part of it anymore. If I knew everything I know now, I probably wouldn’t have been as nice to her. … Cheating and lying it’s just not a good look. Karma’s a b***h.”

As for their own futures on reality TV, Maddi and Grace are hoping for a Vanderpump Rules-like run for Southern Hospitality; that show goes into its 10th season next month. Comparisons came easy for the two series, seeing as they’re both off-shoots from other shows, focused on the staff at establishments owned by stars of other Bravo series (Lisa Vanderpump of The Real Housewives of Beverly Hillsfor VPR); fans noted parallels between Maddi and “season 1” Stassi Schroeder (strong-willed blondes who essentially front their friend groups) and Grace and Scheana Shay (bubbly brunettes with aspirations of being stars).

“I love Scheana, she’s awesome,” Grace gushes. “I love all the girls on the show, but Scheana in particular, and I love Lala [Kent], I think she’s hilarious.”

“I see us growing like them, getting babies, getting married,” she continues, “seeing their whole life and their careers transpire … and I really hope that with Southern Hospitality, we can do that same thing, have you guys watch us and our careers grow, and our lives grow, and everything.”

Both Grace and Maddi say they’ve got a lot more to share with viewers than what the eight episodes showed in season 1 of Southern Hospitality, which scored a GLAAD Award nomination for Outstanding Reality Program.

“I’m excited to be able to have more episodes so they can show more of how close we really are as like [tight-knit] together,” Maddi says. “I DJ and play music, so I’m really excited to get more into that, into what I’m doing outside of work as well as inside at work.”

“I feel like sometimes who we are at work is sometimes not what we’re exploring outside of work, you know?” she adds.

“Yeah, well, I am trying to move out of my parents’ house, so if that works out that’ll hopefully be on season 2,” Grace jumps in. “I am dating someone right now, so you guys would be able to see that part of my life … like, when I was not looking, I found my person. I really think this is my person right now and I see a long-term future with [him], so that’s just been so amazing.”

“I’m just constantly evolving, growing, working on my fashion line,” Grace continues. “And if I stand by quote, like, my p***y is sacred.”

The season finale of Southern Hospitality airs Mondays at 9 p.m. ET/PT on Bravo, followed by an appearance from Maddi, Grace, Joe and Mia on Watch What Happens Live With Andy Cohen at 10 p.m. ET/PT.