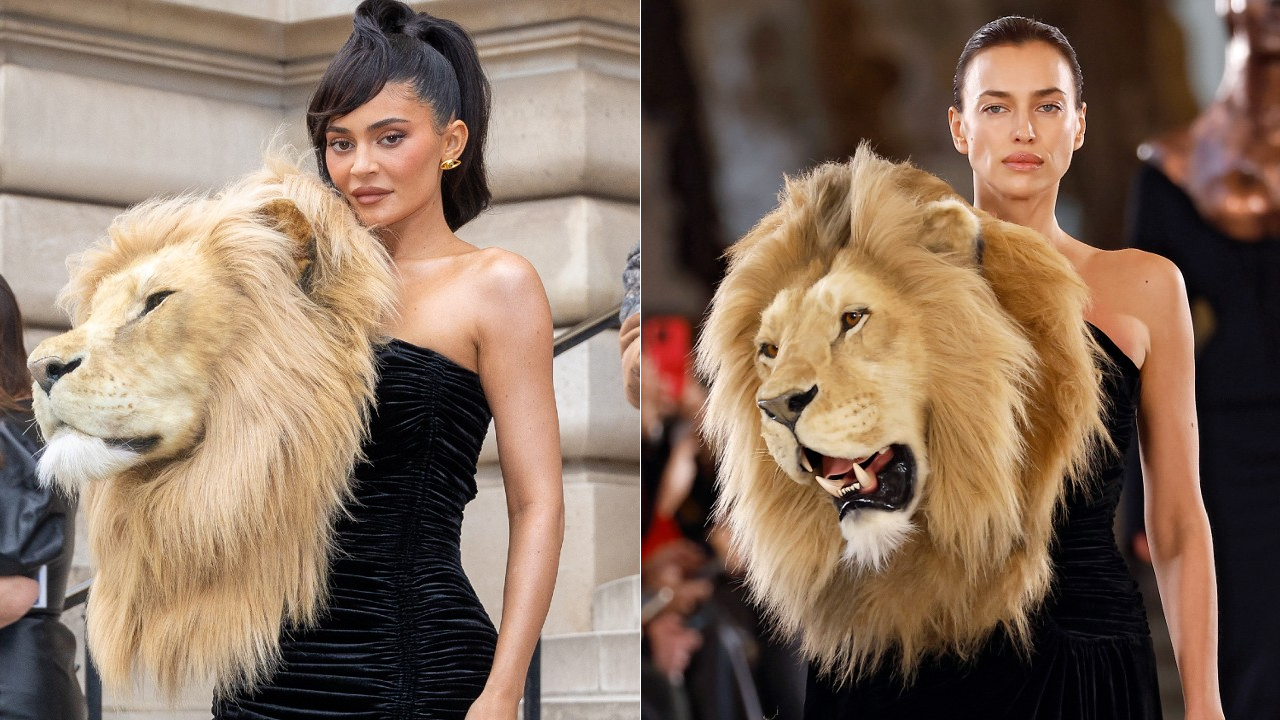 But Kylie didn’t seem impressed as she sat front row during the Schiaparelli show only to see supermodel Irina Shayk wearing a nearly identical look on the runway. The 37-year-old model walked in the show wearing a one-shoulder black velvet gown with her own lion attached at the shoulder. Irina’s lion head was open-mouthed, showing off its teeth.

In a now-viral clip, Kylie is seen sitting in the front row staring at the look stone faced while nodding along to the music. It’s unclear whether Kylie knew a similar style would be featured on the runway.

The mother of two posted a series of photos of her own bold look to her Instagram, writing, “BEAUTY AND THE BEAST. thank you @danielroseberry and @schiaparelli for such a special morning. Wow, I loved wearing this faux art creation constructed by hand using manmade materials. beautiful beautiful ??.”

Irina also posted about the look online, defending the designer against some animal rights critics, who claimed it was glorifying big game hunting.

“I support these incredible artists who worked tirelessly, with their hands, using wool, silk, and foam, to sculpt this embroidered Lion, and image of Pride, An image that @schiaparelli invokes while exploring themes of strength. I am honored to have been called on as well to lend my art as a woman to this @danielroseberry ?” Irina wrote on Instagram.

In addition to wearing matching looks with Kylie, Irina also has another connection to the Kardashian-Jenner clan. She was briefly romantically linked to Kanye West, the ex-husband of Kylie’s sister, Kim Kardashian, after the former spouses split in 2021.

Other stars in attendance at Monday’s show included Doja Cat, who also wore Custom Schiaparelli Haute Couture in a red silk faille bustier and a hand-knitted skirt with lacquered wooden beads and 30,000 Swarovski crystals applied by hand, courtesy of Dame Pat McGrath. Her red makeup and body paint took five hours to apply, and she posed with Kylie at the event.

On Sunday, Kylie also attended the Maison Margiela show in an ice blue mini-dress with a sheer tulle-covered robe and heels.

Her daring fashion statements come after she casually dropped the first photos of her baby son’s face almost a year after he was born, revealing his name is Aire.

She later clarified that the little guy’s name is pronounced “air.”

Kylie and Travis Scott welcomed their son on Feb. 2, revealing at the time that his name was “Wolf Webster.” They later decided against the name, choosing not to reveal their new pick for months.